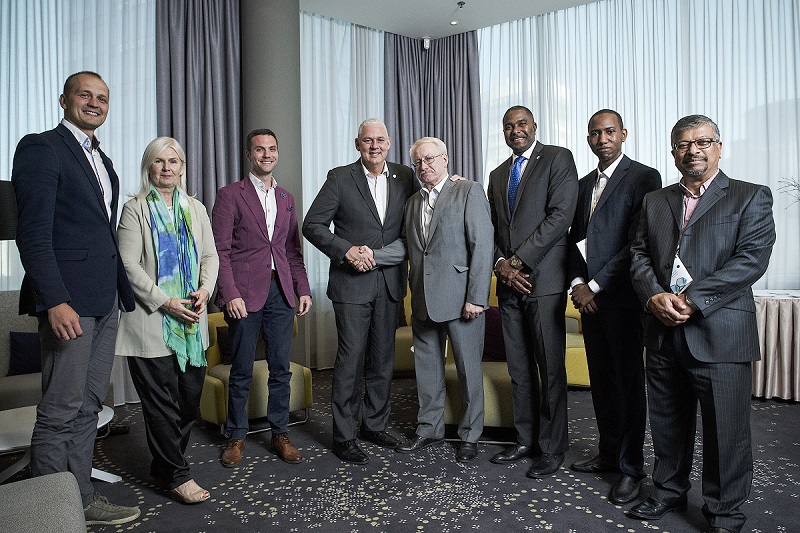 During a meeting in Tallinn on Tuesday 29 May, Prime Minister Allen Michael Chastanet of Saint Lucia and Chairman of the Management Board of Datel, Urmas Kõlli, reached an agreement that will see the Caribbean island nation start using the company’s innovative satellite data-based early warning system Sille this summer.

“Our aim in working together is to use Datel’s new e-service to detect any shifts in the surface of the island, to identify movement in coastal defence structures as early as we can and to plan the building of new infrastructure in the best way possible,” Kõlli explained. “We hope to have a contract signed in the very near future.”

Sille enables clients to monitor the sinking or rising of infrastructure in a simple manner anywhere in the world. The early warning system, which is based on data from the European Union’s Sentinel satellites, can detect these changes in large structures (such as bridges, pipelines, major buildings and port and mining areas) to within an accuracy of one millimetre. The service helps to prevent accidents resulting from infrastructure collapsing, thereby boosting safety in society.

Kõlli says that Sille even makes the constant monitoring of the technical condition of infrastructure both possible and economically viable for average-sized companies and organizations. “This is a really important service, but up until now it’s only been available to global infrastructure companies and agencies related to national defence and security,” he explained. “But Sille means that much smaller companies and organizations can now keep an eye on their assets as well, in a really convenient way.

“Our partnering with Saint Lucia shows that the service is affordable to small countries looking to boost safety in society, too.”
One of the strengths of Datel’s new e-service is that for all intents and purposes clients can start using it immediately: there is no need to take any resource-draining action in order to adopt Sille where linking information systems, administering data and similar e-services are concerned. Using the remote monitoring satellite Sentinel-1, Sille is able to observe large infrastructure anywhere on the planet. Datel has entered into a development cooperation agreement with the European Space Agency, which has also contributed a great deal to the completion of Sille. The new service is already being used by the US state of Maryland, as well as by companies and organizations in Estonia.

More detailed information about Sille can be found online at https://www.sille.space.

Datel AS is one of the oldest and largest Estonian-owned IT enterprises.  Its greatest strength is its competence in the creation of information systems and the development of software and in the field of IT hardware and presentation technology. Clients are provided with comprehensive solutions, ranging from the purchasing of equipment to the housing of software. During its 26 years of operations, Datel has made life easier and more convenient for many Estonians by creating numerous e-state services. The company has been operating in the United States via a subsidiary since 2013.